One of the best ways that I know to learn how to work the Bible and gain scope of the Word is to conduct many word studies. A word study is when you look at a specific Greek, Hebrew, or Aramaic word and identify how it is used throughout the Scripture. Sometimes, the goal of a word study is to more accurately define a word; sometimes, you may believe that the dictionary definition is sufficient. In those cases where you are not looking to more accurately define a word, performing a word study can still be profitable, especially if a word has many usages that you want to catalog and explore.

What is a usage of a word? Let’s consider an example in the English language: heart. Heart could be defined as the muscle in your body that pumps blood throughout the body. The word heart can also be used figuratively to mean “the essential piece of something,” such as “the heart of the issue.” Another figurative usage is more specific than the previous one: “the innermost part of a person’s being or the innermost part of something.” Sometimes people say, “That person has a heart of gold!” Or what about, “You’ll find that restaurant in the heart of the city.” So one English word, heart, can have multiple usages, or ways that it could be understood and defined depending on the context.

Some Greek, Hebrew, and Aramaic words have only one usage in the Bible. Others have one main usage with several minor usages for very specific contexts. Others, especially conjunctions and prepositions, have many usages that are equally commonplace. We’re going to look at some examples of words that fit each of these categories a little bit later in this article.

Often, there is a definition of a word that is so simple and basic that it fits every context that a particular Greek, Hebrew, or Aramaic word is used in. For example, consider the Greek word agape. The word agape is used in many ways, but its underlying meaning in every context is “love.” In Romans 5:5, agape indicates God’s love for man. In I John 2:5, agape indicates the love that a person can exemplify when he/she walks like Christ. In I John 2:15, agape is used to reference to the love that one can have for the world, for the dark elements of the human existence. And in Jude 12, agape is used to indicate the occurrence of meals that Christians shared at times, called “love feasts.” In every occurrence, agape indicates “love,” but the usages vary in terms of who is doing the loving, what the love is, when, where, why, and how.

What kinds of resources are helpful when performing a word study? A basic concordance, such as a Young’s or Strong’s Concordance, can help you identify occurrences of words. But since most Greek words are translated using multiple English words, it is easier to use computer applications or websites such as Blue Letter Bible. A Young’s or Strong’s Concordance is still helpful to find the most basic definition of a word (see the geometric understanding of a word study below). More detailed lexicons, such as Bullinger’s or Thayer’s, can really help you with more advanced word studies. Bullinger does a great job of comparing words that are translated from different Greek words to the same English word. For example, if you want to understand the difference between several words for “to know” like ginsoko or oida, Bullinger is the place to go. If you want to understand different usages of the same Greek word, Thayer’s Lexicon is your best option. The only thing that makes Thayer’s more difficult to work with is that his lexicon is alphabetized in the Greek language. If you cross-reference a Thayer’s with a Strong’s Concordance or use the Thayer’s lexicon that comes with Blue Letter Bible, even non-Greek readers can utilize the majority of what Thayer designed his lexicon for.

There is something that helps me when I’m doing a word study that I call the “geometric understanding of a word study.” It doesn’t work under all circumstances, but I find it useful in the majority of word studies. Look at the example:

Let’s look at some examples of how this works practically. Here’s the example of agape love (I have included both noun and verb usages).

The majority of usages of agape fit either the “God’s love for us” or the “love in manifestation” definitions. The other two usages are minimal—they only occur in a few spots. Here is another example: the name Herod.

In this case, each usage is pretty much equally common.

Here are several examples where the English word is the same but the Greek word matters. See if you can tell the difference between the words and then check your understanding with a concordance (preferably Bullinger’s if you have it). 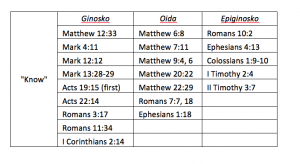 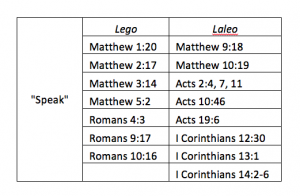 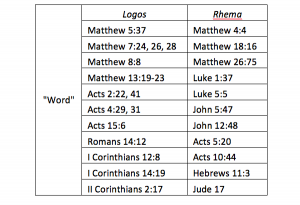 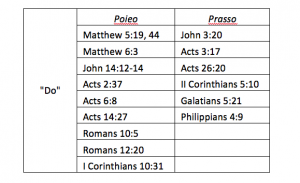 Will Barlow has been interested in studying the Bible since his college days. He received a B.S. in Physics and Mathematics from Vanderbilt University in 2008. He spent some time teaching math in various school settings, earning a M.Ed. in Mathematics Education from Ohio State in 2010. His desire to deepen his faith led him and his wife, Becca, to go on a six-month mission trip to west Detroit in 2012. He currently works as an actuary at a large insurance company. He and his wife, son, and daughter live in Louisville, Kentucky.
View all posts by Will Barlow →